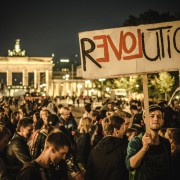 My speech at the Silent Climate Parade focused on COP21 and I promised to post some information for people too lazy to surf the internet. Well, this won’t be a dissertation, but I wanted to collect and point to a few good resources for people to get started with talking about it. Leave more in the comments if you’d like to point my attention towards interesting stuff.

Why does it make sense to solve climate change? If you’re stuck on that question, read the fantastic ‘Story of Energy’ chapter on this waitbutwhy article.

As I said, I think COP21 we need to see it as a chance for our leaders to solve a the issue of climate change, which is so fatally different from other challenges and so far-reaching. Not to say it will solve anything, but it can be a major step in the right direction – the first real one in 23 years since the creation of the UNCCC at the 1992 Earth Summit in Rio.

Many people are still frustrated about the failure of Copenhagen’s COP15 in 2009, which was pushed into the public eye as a decisive moment for climate action. The enormous media attention and heads of state in attendance didn’t really get us anywhere. Many on the activist side explored different paths such as the very successful divestment campaign or direct actions, or like myself more towards pushing practical solutions though innovation and entrepreneurship. Follow the #climate tag on this blog for some things I posted about.

With COP21, there’s again a blossoming hope that there can be a global political solution. On the other hand, if talks fail then it is probably the last nail in the coffin to the idea that we’ll come together as a global village and make the rational choice to preserve our habitat. My wish is that we can start talking about it more and bring the urgency of this to the public awareness. I think those that are serious about a sustainable future need to be vocal about their expectations from their political leaders and drive the conversation.

The Guardian is a good place to get an overview of the most basic facts on COP21 in Paris in December as well as this article on ensia. If even a fraction of this information would permeate into our conversations I’d call it an achievement. Even better, if we would could make it understood that solving climate change is an opportunity to build a better world.

In addition to my posts on this blog, for further reading some more articles that deserve attention on COP21 or climate change:

I’ll be adding things here as I come across them. For now I’ll leave you with Leo.

photo above by Jason Krüger at ekvidi

for their project moral reform, they got ALL of the czech parliament members’ mobile numbers, and created a “parliamentary drama of 223 persons and 585 lines” by sending them 585 SMS messages during a session that was broadcasted live on TV. but the SMS were sent on behalf of other parliament members and included apologetic messages to each other and called for better behavior and more political decency – which caused a panic! read more about it here.

they have created all kinds of amazing projects, but a lot of information is in czech. wikipedia is a pretty good resource though. there’s also a great arte tracks portrait of them, unfortunately only in german.

i’ll end with the manifesto of the project Občan K., from their website:

Citizen K. / I have returned from places where I beheld myself and realised that it is mainly us that matters! We are all a society, we all create the system and we watch one another. We are all involved in the fear that keeps us at a standstill. For all of us I entered the places that others fear to enter and perceived the vanity, the absurdity of obedience. How frail and how easily abused is that which should serve us. We are not numbers, we are not biometric data, so let us not be mere pawns in the hands of the big players on the game board of these times. If we do not wish to fear our own face, we must save it! great case study of effective creative protest in action: getting the politicians to  improve the street quality in yekaterinburg through street art intervention!

the yes men are crowdfunding their next movie on the chamber of commerce, one of the major reasons that effective climate change legislation is not happening in the US! highly worth supporting, they are some of the most inspiring contemporary activists.

(if you don’t know it yet, check out their movie ’the yes men fix the world’)

they also made significant contributions to the book ’beautiful trouble – a toolbox for revolution’ which is indeed a book that’s a great resource for anybody interested in activism.

the silent climate parade will roll again through berlin this september!

remember, when we danced through berlin to demonstrate (for) a sustainable future? if not, read the description below to get and idea of what we’re all about! and check out the 2011 video (thx, laurent!) & the website!

the plan for 2012: on september 22, we’ll start the parade around alexanderplatz. get your headphones between 12-2pm, and then the parade will dance silently through east berlin from 2-5pm. we’re in the midst of organizing, so stay tuned via the fb event!

[EDIT: the DJs are confirmed! we proudly present:

but we need your support: we’re crowdfunding via betterplace to make this day possible again. can you help us to organize the best silent climate parade ever?

The Silent Climate Parade is a demonstration in Berlin to raise awareness about the failure to solve the climate change problem. With wireless headphones, quality DJs on electromobiles, signs, flyers, choreographies, and lots of enthusiasm, we dance silently through the streets in a fun, colorful and inspiring action to catch people’s attention. We do this to show that it’s possible to have fun, be climate friendly, and make a political statement at the same time. Let’s get moving!

Génération Tahrir – interesting looking webdocumentary film project on the youth of egypt that is changing the fate of their country. crowdfunding at kiss kiss bank bank! (thx, giulia!)

click click clicktivism? push button, save planet? still, the carbon pollution standard would be a step into the right direction.. and it’s really just a click away.

today is world water day! one day out of the year to talk about the massive water, sanitation and hygiene crisis that kills 4000 children every day. that’s more than HIV, malaria, and measles combined!

the entire week, more than 360,000 people are joining walks for water to bring attention to this major environmental and health issue. if you’re in berlin, you can join us at 15:00 (fb event)!