nice video from new york asking a good question: ‘where do we go from here?’

just received some sad news from oakland, where police seemed to have used tear gas, rubber bullets and smoke bombs to clear out the protest camp.

in berlin, there was a group of 25-30 people spending the night out in front of the reichstag, even though they were not allowed to have tents. so in effect, this was the first occupation! and they also made it through another night till monday, and as far as i know, also till tuesday morning. thanks to all of you who stayed there in the night!

however, on tuesday the asamblea was informed that they will not be tolerated any longer on the reichstagswiese.  even individuals (i guess if they ‘look like’ they support #occupy) will be arrested and charged! so they had to move to an ‘alternative spot’ 350 m to the west. the bundestag will vote on the EFSF on wednesday, so it doesn’t seem like a huge coincidence that the government wants the protesters gone. the plan for tomorrow is to meet at the ‘alternative spot’ at 3pm to figure out how and where to do the asamblea at 5pm. it seems there also might be support camps in kreuzberg and friedrichshain. let’s hope there will be a livestream! so much for now, i’ll leave you with this interesting video manifesto (in german) and i will be back on saturday. 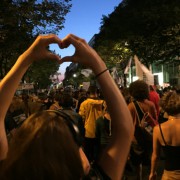